Hamamatsu is one of the largest production centers of wind instruments. Wind instruments produced in Hamamatsu are very popular among not only Japanese players but also world renowned foreign musicians who are active on the front lines in Europe and America.

The Academy started in 1995 as a part of movement for realization of "city of music Hamamatsu" and is the biggest wind instrument festival in the world. For its main purpose to interchange musical culture in Hamamatsu and produce musicians to become world performer, it invites internationally acclaimed wind instrument artists to provide "Academy" to foster young talents who aim to be professional musicians and "Festival (concert)" for the public to casually enjoy the beauty of wind instrument sound. 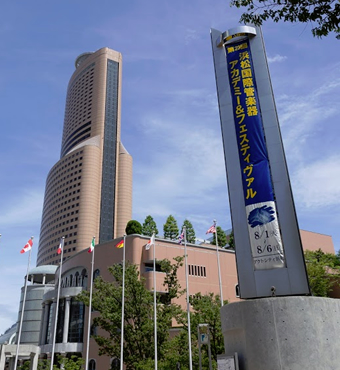 Hamamatsu has come to be known as one of Japan' s prime industrial centers for the production of textiles, motorcycles, and powerboats; it is also the leader in the musical instrument industry, especially that of pianos. We have great pride in the excellence of our technology which is recognized not only by the nation, but by the entire world. Considering that nearly all of Japan's pianos are produced in Hamamatsu even today, we believe that the city is ideally suited to be a city of music.

This "city of music" movement has given rise to a number of policies and cultural projects since its inception in 1979. Some examples include international competitions and public performances of the highest caliber; the establishment of Act City and the Museum of Musical Instruments; and various activities initiated by the residents themselves.

This musical culture is an irreplaceable treasure that belongs to the public that fostered it. The city is determined to continue its realization of "a city of music" in which tradition, the arts and lifelong learning are balanced with our other achievements.